In fact, Xiaomi is currently struggling between sending the upcoming Android 11 update, and sending MIUI 12 updates to its supportive phones, and among these phones was the Redmi Note 8. While the latest UI update with its beta version has already arrived for Redmi Note 8 users in China since last July, even hours ago, none of the users of the global version of the phone had it. And now, the wait is finally over, and you can download MIUI 12 for Redmi Note 8 and install it yourself on the phone, following some simple instructions.

After a long wait, and after the company succeeded in updating some other phones of the same series, including Redmi Note 8T and also Redmi Note 9 Pro, now is the date for regular Redmi Note 8 to get the latest MIUI update, which seems to have started its official launch from today, which came Also next to the  security patch of September 2020. 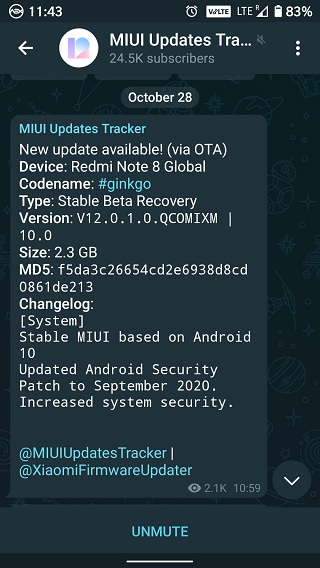 According to the MIUI follow-up Telegram group, MIUI 12 update for Redmi Note 8 came with version number V12.0.1.0.QCOMIXM, and it came in about 2.3GB and is intended for global versions in all countries after several months of waiting. And while the update has not been launched globally yet (meaning there is no notice of a new update for all users), you do not have to wait for it because the official ROM download link has become available below, so you can simply download and install it yourself and we will explain how to do it below.

If you are wondering what you will get after installing the latest update, MIUI 12 update is characterized by then containing some new animation effects, the new iPhone-like control center, a new user interface, a lot of additional customization options, you will also get the new MIUI 12 wallpapers of course Especially the Super Wallpapers that everyone has been waiting for. You will also notice that the new update comes next to September 2020 security patch, yes it is not the latest so far, but it is certainly newer than the one currently on the phone.

You can download the official MIUI 12 ROM to your phone by manually checking for a new update by going to Settings> About phone> System updates. On the other hand, you can download the stable ROM now and install it on the phone from the following link.

You can go to the explanation of installing Stock ROM on Xiaomi device, and there you will find carefully detailed steps for several different ways to install the new system, or you can simply follow the steps mentioned below.

Down here and we’re done! Only now can you discover and enjoy the new MIUI 12 on Redmi Note 8. And if you have any questions, or if there is any incomprehensible step in the update steps, just leave a comment with what you want and we will respond to you as quickly as possible.
Android 10MIUI 12RedmiXiaomi
Share FacebookTwitterTelegram