Android 11 update highly expected by all users while we talk, the first beta version of it has been launched a few hours ago, and this has started the annual race among all smartphone manufacturers about who will be able to launch it to its devices first, or who will join the beta program of the last system . But different this time, and very surprisingly, Xiaomi was the first company to support Mi 10, Poco F2 Pro to try Android 11 in the early hours of today.

But despite that, it was just a mention or announcement from the Chinese company without specifying any specific date for when the new Android 11 beta update will arrive for its devices, and it will most likely reach users of these phones in China first.

But when we talk about the actual challenge as well as matching the pace with Google Pixel devices, the Chinese company OnePlus will definitely appear in the scene as the best company at the moment regarding the speed of its devices support for new official updates, even those experimental ones, as we are used to from them every year. It seems that the Chinese company has not abandoned this wonderful habit now. Yes, now you can have  Android 11 experience on OnePlus 8 and OnePlus 8 Pro with official support from OnePlus.

In fact, a few days ago, the company promised its users that it would launch Android 11 beta soon for the latest flagship phones. 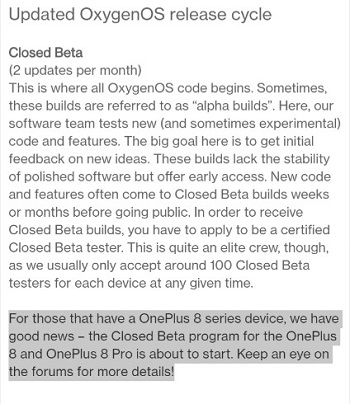 But before the company gets the chance to do so, the American giant has started launching the first beta of the pixel devices for fans of system experience before others, as well as application developers so that they have the opportunity to update their applications in order to support working on the new version of the system without errors. So, download Android 11 Beta 1 for OnePlus 8/8 Pro from the following links.

Before you download the new trial system and follow the detailed steps to install it, you should know that it is still a beta version primarily intended for a very specific category of people who loves to try new versions as well as application developers to prepare support for their Android programs for the new system. Therefore, below you will find detailed steps for how to install the system on the phone, besides there is also a way for Downgrade if you decide that you do not want this system and want to return to the stable Android 10 again.

There are two ways you can update the official inauguration of the phone by using them in general, which is not exclusively only for the current system. The first way will be with the phone settings itself, which is the Local Upgrade option. The alternative method is if you have a custom TWRP recovery on the phone, you can also use it to get the new system.

And when your phone boots inside the system again, it should now work with OxygenOS Beta version of Android 11.

Just in case you decided that you do not want Android 11 anymore, and you want to return to the previous stable Android 10, then download the appropriate Rollback ROM for your phone from the following links, then after that perform the same steps to update the phone in the local Upgrade method mentioned above. After restarting, the phone will have reverted to the previous system before installing beta version.