Xiaomi is making an effort to try to push MIUI 12 update for all of its smart devices while we talk. And if you do not know, there are already a good number of Xiaomi or Redmi phones that have already received the latest system update, and recent reports indicated that the Chinese company has already started sending the update to the second and final batch. Today, Xiaomi has added an additional phone to its list of devices that got MIUI 12, which is the Redmi S2 (the same is  Redmi Y2 but in the Chinese market).

Xiaomi announced Redmi S2 more than two years ago in May 2018, and it came with Android 8.1 out of the box. Since that time, the phone has only received one major system update, which is Android Pie, which came alongside Xiaomi’s custom MIUI 11 interface.

Redmi S2 was on the list of the official company that is expected to receive the MIUI 12 update officially within the third installment in the second group. And it was, Xiaomi believed in its promise and today started launching the new official update for all Redmi S2 users around the world.

MIUI 12 update for Redmi S2 is still on the side of Android Pie and not Android 10 as you’d expect, which is a regular thing from Xiaomi and even most other companies at the moment for mid-range devices that usually receive one major OS update. The new update  The update has been sent to global versions, And it came with the version number V12.0.2.0.PEFMIXM. And for those people who received a notification of OTA update, then the size of the update is 837MB. 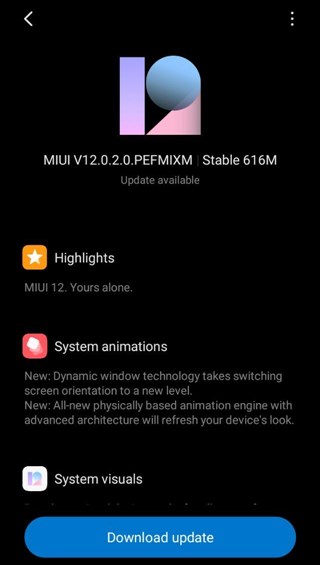 So, do you still want to try the new update before it officially arrives in your region? Then download the official update file from the attached link below, then follow the installation steps carefully.

You can go to the explanation of installing Stock ROM on Xiaomi device, and there you will find carefully detailed steps for several different ways to install the new system, or you can simply follow the steps mentioned below.

Down here and we’re done! Only now can you discover and enjoy the new MIUI 12 on Redmi S2. And if you have any questions, or if there is any incomprehensible step in the update steps, just leave a comment with what you want and we will respond to you as quickly as possible.
Android PieMIUI 12RedmiXiaomi
Share FacebookTwitterTelegram