The global version of the Redmi Note 9 received MIUI 12 update along with the Android 10 operating system in late July. However, for some inexplicable reason, Xiaomi pulled the update again and stopped its access to users. So, until recently, phone users around the world were still waiting for the latest system update as well as the new MIUI interface to be launched again.

Fortunately, users of the global version of Redmi Note 9 will not need to wait for a long time since Xiaomi has officially announced that it has “relaunched” the MIUI 12 update for Redmi Note 9 again. The new update has version number V12.0.3.0.QJOMIXM and it is being launched to users while we are talking over the air.

A while ago, Xiaomi announced the latest releases of the Redmi Note 9 series in the market, which consisted of 4 new devices. Redmi Note 9S and Redmi Note 9 Pro were the same in most features and internal gear, while Redmi Note 9 came out completely different. It was not long before the company announced the same phone in China, but with the name Redmi 10X 4G, which came with the same design and you could not differentiate between them until after you saw the operating system in both of them. 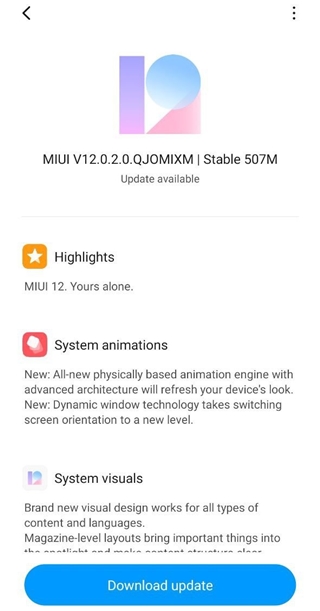 OTA update is supposed to reach users of the phone with a size of approximately 507MB, so as soon as the new update notification appears, you must make sure that you have connected the phone to a stable internet. This information is also important for users of the same global version of it, Redmi Note 9, because official Xiaomi updates are usually launched for global releases within days or for a period of up to a week at the latest, for example.

You can go to the explanation of installing stock ROM on Xiaomi device there you will find detailed steps accurately on several different ways to install the new update, or you can simply follow the steps mentioned below.

Now we’re completely done! Only now you can discover and enjoy the new MIUI 12 on Redmi Note 9. And if you have any questions, or if any step is not understood in the update steps, just leave a comment as you like and we will get back to you as quickly as possible.
Android 10MIUI 12RedmiXiaomi
Share FacebookTwitterTelegram