In order for a company to be a part of Android One program Google, it must observe some specific conditions set by the American giant. One of these conditions, and perhaps the most important one, is that the company should not place any unnecessary apps pre-installed (bloatware) with the OS, which leaves the freedom for users to install any of the apps they need to use only.

Another condition that is equally important as the previous one is for the company to commit to launching at least 2 major OS updates from the time the phone is announced. This means that a device with Android One must work with three different versions of the system during its support period, and that includes the system in which it was launched from the box.

In addition to the “relatively” cheap price compared to other phones, along with guaranteed system updates for a period of never less than three years, Android One OS that Nokia smartphones have come with since their return to the arena has made it a very great option to buy in any category, Especially if you are looking for the best possible value for the price.

In fact, HMD Global (which acquired Nokia several years ago) is considered one of the few companies that includes at least 2 major OS updates for most Nokia phones in the mid-range class, as we have seen with the latest Android 10 update, including: Nokia 1, Nokia 1 Plus to name a few. So, it will be easy to find out which Nokia devices will be updated to the upcoming Android 11.

Nokia phones that will receive Android 11

Like the Android 10 update for Nokia devices, we do not expect the Android 11 update to arrive before the third or fourth quarter of 2021. Once the update arrives, the phones mentioned in the following list should be updated to the new OS, given that this list is “unordered”, at least according to the usual Android One system policy. 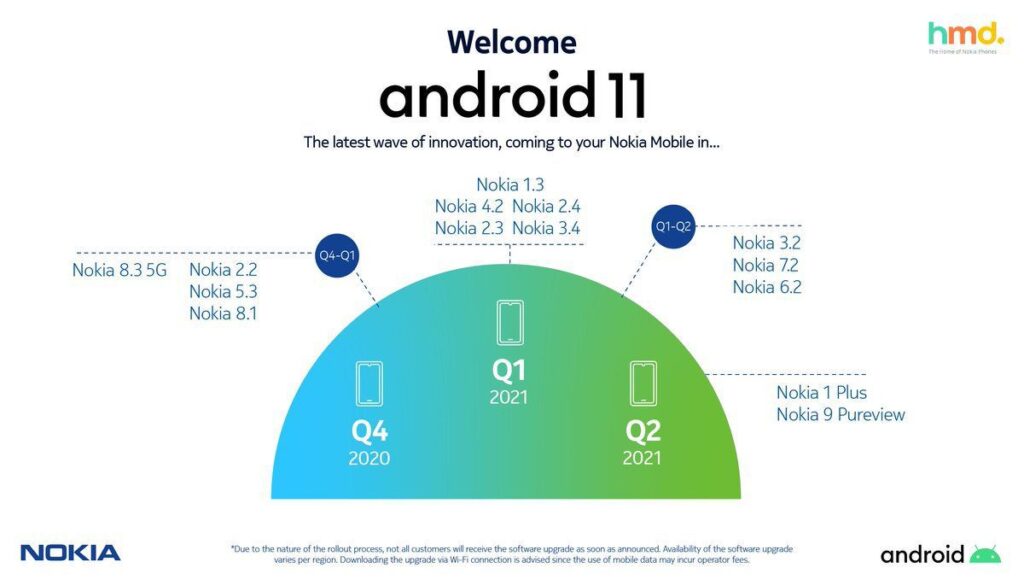 The following list includes Nokia phones that are waiting for the Android 11 update as their first major update. Which means that all of the following phones came with Android 10 out of the box:

As for this list, it includes Nokia phones that will be upgraded to Android 11 R as a second, and last major update . So, all of the following phones came with Android 9.0 out of the box:

What we know so far

Once again, Nokia has not yet officially indicated any of its devices will support the upcoming Android system, whether it is beta or stable. The company, however, made a tweet on its official account in Twitter about the date of availability of the Android 11 system, and then quickly and inexplicably, the company deleted the tweet!

In any case, according to the tweet that the company published and deleted again, the following devices will be the first phones to receive the next system, starting from the last quarter of the current year 2020 until the first quarter of 2021:

In addition to the official updates starting from the second quarter of 2021, the phones will be as follows:

As for the rest of the phones, you will receive the last system at some point between the first quarter and the third quarter of next year and include the following phones:

Nokia has once again shared the map of Android 11 update as well as when it is supposed to launch it for it’s smart devices. Surprisingly, this tweet specifically indicated the dates that the company shared last month and then deleted it! Regardless of it being a flagship phone from the Finnish giant, the Nokia 9 PureView will still get the next Android R OS in the second quarter of next year, according to Nokia’s recent tweet on Twitter.

While Nokia claimed that the Nokia 8.3 (5G version) has become ready for the upcoming Android 11 update, this does not necessarily mean that the phone will be updated to the next system closer than expected, as the company did in previous years.

Of course, the previous list is not official from Nokia, but it is nonetheless “almost certain” depending on our follow-up to the policy of Nokia updates in previous years, as well as the rules of the Android One program system from Google.

However, we will follow this topic closely and will add any new information available regarding Nokia phones with Android 11 update, whether official statements or even confirmed leaks. Until then, I can assure you that all the phones mentioned in the previous lists will have the upcoming Android 11 system.