Samsung for quite some time now has been following a steady pace in the process of updating its smartphones to the latest Android 10 OS, along with the latest One UI 2.0. Many Galaxy phones also have received the One UI 2.1 update, while there are still many other devices that are still running the One UI 1.0 version so far, and among these devices was the Galaxy M10.

The Korean company has already updated most of the Galaxy M series to Android 10 next to One UI 2.0 and these phones include: Galaxy M10s, M30s, M40, in addition to Galaxy M20, M30. However, according to Samsung’s statements, the Galaxy M10 is supposed to get the latest Android update at some point during August 2020, and it was.

Now, it seems that the Korean company has finally decided to turn to its mid-range phone, Galaxy M10, and update it to Android 10 with the latest One UI. The information that we have mainly comes from Samsung support forums, where a user from Iraq indicated that his phone had already received the official update a while ago, and for some incomprehensible reason the company has not yet launched it for most users around the world. 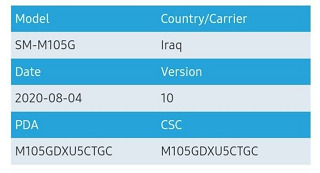 The previous image shows us that users of the Galaxy M10 in Iraq have obtained the Android 10 system next to the One UI 2.0 interface with version number M105GDXU5CTGC. However, it is strange that Samsung has not yet updated its official list of devices that have been updated to the latest system. It is also not known if this update was launched only for Iraq, or for all units around the world. Therefore, if you happen to be using the Samsung M10 phone and got the latest official update, please do comment below to let us know whether the official update is available for your country or not.

In any case, the fact that the official ROM download link has become available in an Arab country, this means that any of the phone users in any other Arab country can download the update and install it manually on the phone, because the official Samsung ROMs are not so radically different for different countries, and the difference is only here if The update was intended for phone users in China or the United States because these phones contain Qualcomm chips and not Exynos like the global versions.

What I mean here, you can simply download the official update from the direct links below, then install it yourself using the steps shown next without any worries that the update is not compatible with your phone.

You can now download the update file from the bottom and install it manually on the phone by following some simple instructions, without worrying that this may affect the phone’s warranty or anything wrong because it is completely official from Samsung. The update, as mentioned, is only suitable for the Galaxy M10, and  you can download it from the following links.

We will add links to download the update for Arab countries as soon as it becomes available, although there are no differences worth noting between updates directed to any other country.

Next, there are some tools that you will need during the trip to install stock firmware, and here is a list of them:

And here we done! This was the full explanation of how to update the Galaxy M10 to the latest Android 10 OS with all-new Samsung UI 2.0. If you have any questions, please leave them in the comments.