Samsung finally officially unveiled the Galaxy A71 after it also announced the Galaxy A51 at the CES 2020 conference. Both phones were released within the mid-range price segment. Speaking of the new Samsung A71, it has under the hood a Qualcomm Snapdragon 730 chip, 4-lens rear camera, AMOLED screen with Infinity-O design which looks great like we saw on the Galaxy S10 . And such a version will of course not be completed without designing some new official wallpapers, so below you can get the official Galaxy A71 wallpapers in FHD+.

The new A71 and also the new A51 from Samsung come with 10 new wallpapers designed by the company, we have not seen them with any smartphone before, but nevertheless we currently have 9 of them only and you can download them from the bottom in full resolution in relation to the lock screen as well as the main screen. All backgrounds come in strong colors and have a cool design. And if you’re worried about resolution then don’t worry then all wallpapers are in Full HD 1080 x 2400 pixels. The backgrounds below are just a “preview” of the original version only, so you can see it, then go directly to the download link for the original version below the attached wallpapers.

And after downloading Galaxy A71 wallpapers in full resolution as usual, let’s take a quick look at what the Samsung A series has in 2020. Both versions of the Samsung A51 & A71 are the latest versions of their predecessors Galaxy A50s & A70s, knowing that they were among the best-selling phones in the category Average price last year. So I think that was a very sufficient reason for the Korean giant to launch the same versions but with improvements in most aspects. Starting from the screen, Samsung A71 has an AMOLED display with a 6.7-inch Infinity-O design with 1080 x 2400 pixels dimensions. Of course, this design features a front camera “under display”.

Galaxy A71 has a Qualcomm Snapdragon 730 processor, and it runs Android 10 alongside the custom One UI 2.0 version of the box. The new smartphone from Samsung is available with two options of RAM: 6GB or 8GB, with 128GB of storage. You can however increase this capacity with external SD cards for up to 1 TB.

Going to the imaging capabilities, Galaxy A71 has a 4-sensor back camera with a 64-megapixel primary lens that supports pixel-binning technology to get the most detail possible while taking a picture. The primary camera here has an f/1.8 aperture and support for HDR, PDAF technologies. Otherwise, there is a 12-megapixel ultrawide sensor, a 5-megapixel macro shoot, and a 5-megapixel depth sensor lens. Galaxy A71 can shoot and record videos in 4K. 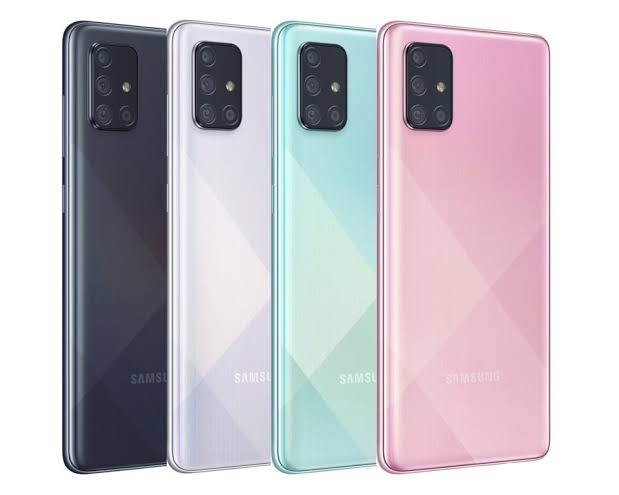 As for the front camera, you will get a 32-megapixel selfie camera with an f/2.2 lens and a 0.8 micron pixel size. alaxy A71 has a massive 4,500mAh battery which supports 25W fast charging technology. The smartphone is distinguished by being available in five different colors on the market. The price of the Galaxy A71 will start from 6,700 EGP (launched at $ 420).