In this article, we will take a quick look at Oppo devices that “most likely” will receive  Android 11 when due, which is also expected to come alongside the ColorOS 11.0 UI update, which is the next version of the custom Oppo UI after the previous ColorOS 7.0 release. However, you should know that Oppo has not officially announced anything about its upcoming interface or Android 11 update for its phones, so expect that there will be changes in the aforementioned list below when the official list of the Chinese company’s phones that will receive the last system appears, at some point in the late 2020.

Latest update to the list of OPPO phones that support the upcoming Android 11 updated on: October 30, 2020 .

In 2019, Oppo only supported two phones for the Android 10 developer beta, and it was the Oppo Reno and Realme 3 Pro. As for the current year with Android R OS, the developer version is expected to support more phones, and it is likely that it will support 5 or 6 phones even for the upcoming Android 11 beta program.

In fact, just yesterday, there were leaks about the ColorOS 11 Beta update next to Android 11 in China that had started for Oppo Find X2 and Find X2 Pro, which means that we will see the new interface as well as all it’s features coming soon. The beta program is currently in progress, and will end on May 15, 2020, and its time will be near the date of the launch of the penultimate beta Android 11 update for most Android phones (supporting Google Treble) or the GSI version.

Given that the Android Q developer version was available for the Oppo Reno specifically since May 2019, then it got the Android 10 update alongside ColorOS 7.0 during November 2019, and then finally it got the stable version in April 2020, so the result here is that in fact that tells us A lot about the Chinese company’s updates policy in the upcoming Android 11 update for OPPO devices.

Depending on the foregoing, the upcoming ColorOS 11 beta program will start from the last quarter of the current 2020, and it is also possible that the stable version will start to reach users starting from the first quarter of 2021. Once again, this is only speculation, and there is nothing official from OPPO, And that is unlike Realme that has been following it recently, which in fact officially announced the list of phones that will get the Realme UI 2.0 update, so these expectations are very likely to change in the coming period given that the update still has a long way to go until confirmed information appears about it. However, we will update this page every time new information becomes available.

A while ago, the Chinese company revealed that Find X2 and Find X2 Pro will be part of the upcoming system’s beta program. About two weeks after this statement, Find X2 Android 11 update and also the Pro version had already received the new system, which inexplicably came with the version of ColorOS 7.2 and not ColorOS 11.0.

Given the amount of very huge customizations of Oppo ColorOS UI, it would not be surprising that Oppo is one of the companies late in launching the new update, which will likely start in early 2021. But as we are used to, we will continue to closely follow the process of updating OPPO phones, and we will also add any new information as soon as it is available here, whether it is beta or stable versions. Next, here are the Oppo phones that have received Android 11 R so far: 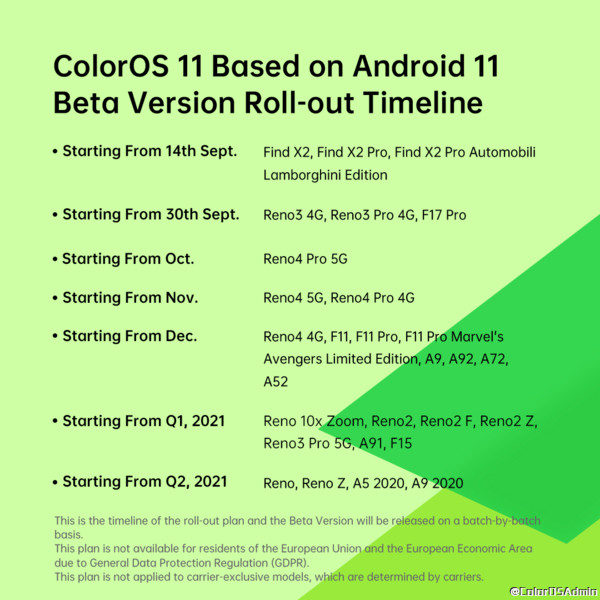 There are many Oppo phones that were launched with Android 8.0 OS out of the box, which were also supportive of the Android 10 OS. So, yes, the Chinese company supports all of its phones with two versions of the major operating system updates like most other companies. As for OPPO’s decisions about who will receive the next system update or not, it is not clear. But nevertheless, we think that the next list of OPPO phones “probably” will be supportive of the upcoming Android 11 system, which will often begin to reach users at the beginning of 2021.

Today, OPPO launched ColorOS 11 beta program for Reno4 Pro 5G in the United Arab Emirates as well as the Kingdom of Saudi Arabia. The number of available to try the next update is limited to 4,000 users only, and you can join starting today. And in case you want to experiment, Then go to the this link.

In the event that you have successfully registered, then you will wait for three days until you get the last beta OS, knowing that you are to be able to receive the beta version, your phone must currently work with the system version CPH2089PU_11.A.19 or higher.

Did you happen to not see your phone in this list? I advise you not to worry then because this list is not final, nor official for sure, but it is based on our follow-up to the OPPO updates policy in the past few years. Therefore, it is likely that OPPO phones that support the upcoming Android 11 system alongside ColorOS 11 will be modified several times in the near future.