Poco F1 or Pocophone F1 from Xiaomi is currently considered an icon for the name of the “Flagship killer” since it came with the most powerful internal processor and equipment in the world at the time of its launch, yet it came at an average phone price. The phone even for the time being is still a loved and powerful phone by 2020 standards. Besides the best value you can get for the price, another one of the important things that distinguishes the Poco F1 is the company’s promise to release 2 major system updates for it, and security patches for three years, and that was true because  Android 10 for the Poco F1 has already arrived.

So, as of the time of writing these words today, I would like to say that Xiaomi has actually promised its users. But of course, since the phone was the first with the Xiaomi POCO brand, there are many potential obstacles here and there. With the company launching the second edition of the Poco series, which is Poco X2, things have become unclear to Poco F1 users at the moment as the company now has a new version to capture its interest. As a result, there have been questions about the possibility of MIUI 12 alongside the Android 11 for Poco F1.

And if you don’t know, Pocophone F1 came with Android Oreo out of the box, and now it is already running the latest official Android 10 so far which it got in the beginning of the current 2020. So, of course, you should not raise your hopes for the arrival of the Android 11 for Xiaomi Poco F1, at least not officially!

Xiaomi may change its policies in updates!

Of course, as we are used to from the Chinese company it has never launched more than two versions of the system for one phone before. But according to a moderator in the MIUI Support Forums, the arrival of MIUI 12 update for the Poco F1 has been confirmed, which will often contain many features mainly quoted from Android 11.

The Poco F1 phone has already received the updates promised by Xiaomi, so anything more than that is just another thing. Accordingly, the MIUI 12 version is coming for the Poco F1. Don’t mind those lists in the Chinese sites that have appeared here and there, because the Pocophone F1 is not available in the Chinese market in the first place, so you probably won’t see it in any of these lists that are waiting for MIUI 12 update. As for Android 11, well, This is a far-fetched step, and as I mentioned before an additional update the phone gets, it is just one more thing. So far, Xiaomi developers have kept their promises and updated the phone to Android Pie and then Android Q. 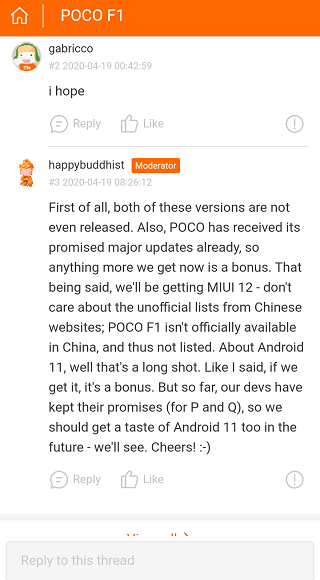 Even that the last screen capture image might give you some hopes for the arrival of Android 11 system for the Poco F1, but there is no real reason to get excited about it here. Yes, we can confirm that Poco F1 phone “will not receive” Android 11 update especially that the official system from Google is not even close to the stable phase. But nevertheless, it is excellent thing that we can confirm the arrival of MIUI 12 to the phone, because the new Xiaomi interfaces usually come loaded with most of the features of the latest Android system.